2 Dividend-Payers to Buy in the Tech Space

For a visitor from Mars, it would seem we’ve just closed out a snoozer of a quarter.  The institutional benchmark for the U.S. stock market, the S&P 500 index, gained less than half of 1% for the period, but there were plenty of nocturnal noises to jolt investors out of any sweet dreams! 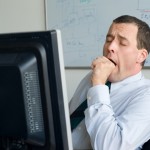 If we had to place a finger on one factor that disturbed the financial markets’ repose in the past three months, it would be the dollar.  The trade-weighted U.S. dollar index surged 8.9% for the quarter, a huge jump for the world’s dominant currency.

A big run-up in the dollar automatically depresses results for U.S. investors in foreign stocks and bonds. Indirectly, a strong dollar also puts a damper on demand for commodities like oil and gold — traditional havens from the long-term (decades-long) slide in the buck’s purchasing power.

Finally, a soaring currency shrinks the overseas profits (translated into dollars) of U.S. multinational corporations.  Thanks in large part to the dollar’s rise, analysts have slashed their Q1 earnings estimates for the S&P 500 companies since Dec. 31 — from a projected 4.2% year-over-year increase back then to a 4.6% decline now.

Still, I advise you not to overreact to these developments.  In my 40-plus years as an investor, I’ve witnessed four extended periods of dollar strength.  Each time, shortsighted pundits declared that the dollar would keep climbing, with ruinous consequences, indefinitely.  It didn’t.

Currency markets go to an extreme, then reverse (and veer off to the other extreme).  Nothing is permanent, in foreign exchange, but change.

With that philosophical wisdom in mind, how should you invest?

Buy high-quality assets that have been knocked down by the dollar’s extreme strength.  In my personal portfolio, I’m building a position in Microsoft Corporation (NASDAQ:MSFT), one of the world’s most powerful and durable franchises — a true cash gusher.  (I’ve never understood why Warren Buffett is so enamored of IBM (NYSE:IBM), when MSFT clearly sports the stronger and more sustainable business model.)

At slightly over 3%, Microsoft’s dividend yield stands within a whisker of its five-year high.  I’m not going to lend my money to the inflation-prone U.S. Treasury at 2% (on the 10-year note) when MSFT will pay me half again as much — with a tax break on my dividends, too.  MSFT rates a “buy.”

By the way, I’m detecting a definite uptick in employee morale at Microsoft since Satya Nadella took over as CEO from bluster-meister Steve Ballmer.  Over the next two or three years, the newly energized Microsoft workforce could deliver some very pleasant surprises for investors.

Elsewhere in the tech space, Intel Corporation (NASDAQ:INTC) has bounced in recent days on rumors that the chipmaker may be mulling a takeover bid for rival Altera Corporation (NASDAQ:ALTR).  My reading of the story is that a combination of the Intel and Altera could make good business sense at the right price.

However, I see no need to get excited about an unconfirmed deal.  INTC, a member of my dividend portfolio, continues to merit a “buy” but only on dips.  From that level, I project a total return (dividends plus price gain) of 15% or more in the next 12 months for Intel.