Microsoft (MSFT) Looks to the Past for the Right Moves 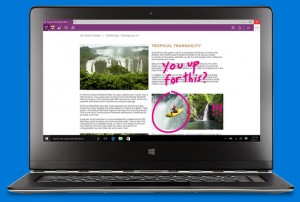 And today, we are getting the Windows 10 launch.

Remember, when Bill Gates started MSFT (yield: 2.7%), it was built around his operating system, which gave users a friendly graphic user interface that finally hid all the coding and programming guts that are crucial to operating computers. This was revolutionary.

Now, there’s some debate whether Gates took the idea from Steve Jobs, who had been working with Gates on a GUI for AAPL. But since those early days in Silicon Valley, while their personal friendship recovered eventually, the two companies have remained fierce competitors when it comes to their respective OS development.

At this point, one Windows OS or another runs on 85% of the desktops in the world. But the challenge is, desktops are quickly becoming an old technology as more mobile devices are becoming more widely adopted. In that space, Microsoft seriously lags behind AAPL and Google’s (GOOG) Android.

The company’s attempt to transition to the mobile market was the ill-fated launch of Windows 8, with a completely new GUI specifically designed for the touchscreens on smartphones, tables and laptops.

MSFT also was working to ingest its merger of once-mighty phonemaker Nokia (NOK). The idea was to make a new OS that would allow MSFT users to transition to the new mobile world effortlessly. The company saw Windows 8 as a way to integrate on OS across all its platforms. But this grand experiment fell flat and left the company in a difficult position. To this day, Windows Phone OS accounts for about 3% of smartphone market share. After such a big merger and large OS commitment, it’s hard to turn back because it’s bound to be very expensive and look bad.

However, thanks to the leadership of CEO Satya Nadella, MSFT has retooled and has been working very hard to refocus the company on its strengths – its Surface tablet line, its Xbox gaming division, the Cloud and operating systems.

Nadella’s biggest (and best) move so far was to grow MSFT into the cloud. Its OneDrive is extremely popular. It is basically an online OS to all of Microsoft’s iconic tools — Word, Excel, PowerPoint, etc. — but all of it is stored in the cloud instead of your computer. This means you can use mobile devices more easily since you can access your files and work on them, regardless of your location or device.

Regarding its Xbox gaming division, China has officially opened its market to video game console sales. This could be huge. But some analysts observe that China is not culturally that interested in owning game consoles since the gamers have grown up using their phones and going to arcades to play with friends. Plus, the consoles are relatively expensive. However, any new sales will be a good thing for MSFT and there will no doubt be growing sales in China, even if it doesn’t turn out to be an unmitigated success.

MSFT stock is a bargain compared to much of its competition, trading at 16 times trailing free cash flow versus the S&P 500 average of 20. But the company has a lot to prove moving forward. The launch of Windows 10 will be an important step for Nadella. And the reviews are positive; it seems the new OS is more about fixing some of the problems with Windows 8 than continuing to make more changes. The company is even giving current users of Microsoft OSes free copies of Windows 10.

Microsoft is making good moves in the right directions now. And given that MSFT stock has been treading water for the past year, it might start getting some deserved positive attention from Wall Street again. In short, Microsoft is showing all the signs of making a strong comeback in coming quarters.