The Outlook for MLPs Is a Little More Encouraging

Creepy. Scary. The plunge in oil prices over the past 13 months, along with the collapse of just about any investment even vaguely related to petroleum, has created a skin-crawling, palm-sweating horror show. 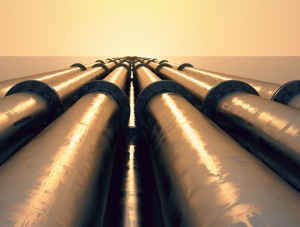 But the last frame of the movie may come sooner than you think.

On the face of it, last week’s action in the oil pits seemed to tell the same old disaster story. West Texas crude for September delivery was settling in the $44 area, and marked a low close last seen in mid-March.

However, oil equities have shown at least some resilience. Last week, as oil was touching those lows, the Energy SPDR (XLE) was up 1.6%, and the battered Alerian MLP Index closed well off its morning lows.

This is the type of positive divergence (producer stocks stable or higher, raw material lower) you see when oil is attempting to make a firm bottom.

Meanwhile, I’m encouraged by a comment last Tuesday from David Rubenstein, billionaire co-CEO of the Carlyle Group, a private equity firm. In an interview with CNBC, Rubenstein — whose organization has successfully backed energy projects worldwide for decades — said:

“In time, (oil) prices will come back, in time demand will catch up with supply, and in time I do believe that carbon-related energy will turn out to be one of the best investments in the world.”

The key phrase, of course, is “in time.” In the very near term, we can still expect some unpleasant volatility, as we did last Wednesday, when Plains All-American Pipeline (PAA) roiled the MLP space.

During the partnership’s quarterly conference call, PAA management hinted that if necessary to maintain a margin of safety in the pipeline’s cash flow, Plains might not increase its cash distribution in 2016. Wall Street misinterpreted this cautious statement as a prediction that the payout would remain flat in 2016 — and savaged PAA’s unit price, along with nearly every other name in the MLP universe.

At a 7.9% cash yield, PAA is trading as if the partnership’s growth had permanently downshifted to perhaps 1%-2% a year. I don’t think that’s the case, by any means.

On the sell side, we’re letting go of a food stock, Kellogg (K), which served us with a 60.7% total return for our Incredible Dividend Machine — one of the various portfolios you can access via my Profitable Investing service.

That might sound pretty solid, but K’s share performance has actually ranked well below that of most peers in the food group over the past five years. Management has responded much less effectively than, say, the folks at General Mills (GIS) to changing consumer tastes.

Take advantage of the recent “flight to safety” rally in the stock and bid Tony the Tiger adieu.

Another name to part with while we’re in selling mode: Clorox (CLX).

Unlike Kellogg, CLX has done a reasonably good job of boosting its profits over the past few years. However, the share price has exploded far beyond reason. At more than 23 times estimated FY16 earnings (ends June 30), CLX now commands its highest forward multiple of the past decade.

Sell now before those bright gains get bleached out!